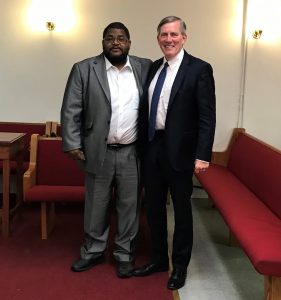 CSOSA Director Richard S. Tischner and other key agency staff members recently visited a faith-based program in Milwaukee that has successfully trained scores of returning citizens and helped them find well-paying jobs in manufacturing and other sectors.

The mid-May fact-finding mission was arranged at the suggestion of Senator Ron Johnson of Wisconsin, who talked about the program – called the Joseph Project – during the Director’s confirmation hearing. Senator Johnson chairs the Senate’s Committee on Homeland Security and Governmental Affairs and has supported the Joseph Project since its founding.

CSOSA has its own array of training and employment programs, including its Community Engagement and Achievement Centers (CEAC), and is planning to expand its outreach even more by building on its own success and successful efforts elsewhere.

“We appreciate the invitation from Senator Johnson to learn about an employment readiness program that improves employment outcomes and success for those under supervision,” said Director Tischner.

Founded in 2015, the Joseph Project began as a constituent service through Senator Johnson’s office. Senator Johnson found that manufacturers throughout the state were struggling to fill positions, while people in the central city of Milwaukee were facing challenges in finding employment. Staffers with Senator Johnson’s office began working with Pastor Jerome Smith Sr., of Milwaukee’s Greater Praise Church of God in Christ, to identify people in need of employment who were ready for a change. The church runs the program.

The Joseph Project is a voluntary initiative designed to assist unemployed Milwaukee residents secure and maintain permanent employment through providing resources, education and support. With a more than 70 percent job retention rate, the program focuses on stabilizing some of the most disenfranchised citizens of Milwaukee, many of whom are returning citizens. Although Wisconsin’s economy heavily relies on manufacturing, the manufacturing plants are located quite a distance from the Milwaukee city limits, creating additional employment obstacles. To assist participants in overcoming this obstacle, the Joseph Project provides participants transportation to and from work via their shuttle service that runs 24/7.

Once a month, a new group of 15 to 20 participants attends free week-long sessions, taught by volunteers at the church. The participants undergo four days of intensive, boot camp-styled job readiness training, where they work on subjects including workplace etiquette and attire, résumé writing, interview skills, time and stress management, and conflict resolution. The fifth and final day is interview day, in which the participants are interviewed for positions with the Joseph Project’s many manufacturing partners. During Director Tischner’s visit, for example, nearly 20 people took the class and emerged with job offers by the end of the week.

“Because the Joseph Project recognizes that employment is one of the most important factors in helping those under supervision live stable and productive lives, they have been able to connect hundreds of Milwaukee residents to meaningful careers and place them on a better path,” Director Tischner said.

For returning citizens, employment security can begin while still incarcerated. Individuals incarcerated at the Milwaukee county jail who participate are permitted to leave the jail daily in order to attend classes so that they are ready to work if offered a position after their release.

“We are grateful to Senator Johnson and Pastor Smith and the dedicated program staff at the Joseph Project for taking the time to share this innovative approach with CSOSA,” said Director Tischner. “We hope to draw from the best practices we observed  in Milwaukee in expanding CSOSA’s employment outreach initiatives.”